The Creel (Criel) Mound in South Charleston is the largest of approximately fifty conical type mounds of the Adena culture in an area west of Charleston extending to Institute. The precise age of the Criel Mound is unknown, but archaeologists believe it dates to the time of the Grave Creek Mound in Moundsville, probably built between 250 and 150 BCE. It was the burial ground for an Indian village located on the site of the city of South Charleston some 2,000 years ago. It is unknown when the village disappeared, although some have suggested it remained until as late as 1650 CE In West Virginia, the 35-foot high and 175-foot diameter Criel Mound is exceeded in size only by the Grave Creek Mound.

The Adena people were the first Native Americans to build ceremonial mounds. In other parts of the world, ceremonial burials had occurred much earlier. The Egyptian pyramids date to 2700 BCE; in England, stone chambers called barrows were used as early as 2000 BCE; between 1700 and 1400 BCE, keirgans were used in central Siberia; and the burial mounds of the Choo Dynasty in northern China date to 1000 BCE.

We know little about how or why the mounds were built. Historian Otis Rice suggests these early Americans “built mounds over the remains of chiefs, shamans, priests, and other honored dead.” For their “common folk,” the Adenas cremated the dead bodies, placing the remains in small log tombs on the surface of the ground. Virtually all of these graves have been destroyed by nature and later settlement. Therefore, the more substantial mounds are our only physical records of Adena burials.

The Criel Mound was first excavated by Professor P. W. Norris of the Smithsonian Institute in 1883 and 1884. Tunneling from the top down, the archaeologists discovered the following:

At the depth of 3 feet, in the center of the shaft, some human bones were discovered, doubtless parts of a skeleton said to have been dug up before or at the time of the construction of the judges’ stand. At the depth of 4 feet, in a bed of hard earth composed of mixed clay and ashes, were two skeletons, both lying extended on their backs, heads south, and feet near the center of the shaft. Near the heads lay two celts, two stone hoes, one lance head, and two disks.

As they dug to a depth of 31 feet, numerous other skeletons were found, including a burial vault containing the remains of eleven Native Americans thought to have been killed in battle. There was also evidence that some may have been buried alive. As was the custom, various jewelry and weapons were placed in the buried vaults. Today, all the artifacts and skeleton remains are maintained at the Smithsonian Institute in Washington, D.C.

Learn more about the Criel Mound and the Adena people at the South Charleston Interpretive Center. 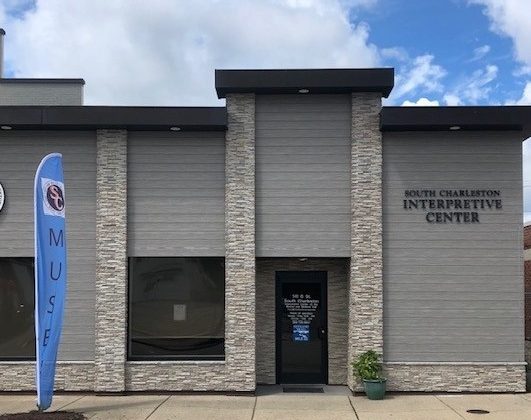